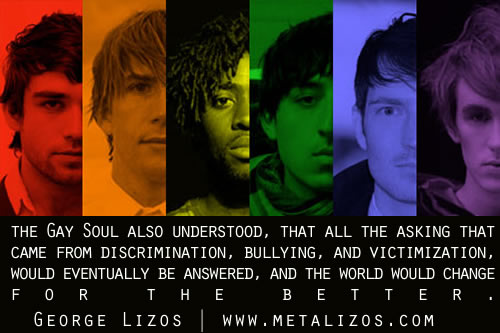 The Gay Soul: Born This Way. But Why?

I’ve been very tentative to dwell on the concept of Homosexuality and Spirituality before, just because both words are so loaded with tension and controversy. However, in a recent interview for a radio show, I was asked a question that inevitably forced me to go down that road.

Why are gay people born this way?

Although I hadn’t really considered, or meditated on the question before, I instinctively replied with a perspective I gained from Abraham-Hicks. General enough to appeal to all expressions of difference, but specific enough to resonate with the topic of homosexuality, Abraham’s take on the matter really resonated with me on a deep level.

The Story of Creation

To really grasp the basis of this question, and the benefit of being different in general, it is imperative that we dwell on the time-old question, ‘What is the meaning of life?’ Abraham suggest that, before we incarnated into these physical bodies, we were pure-positive, all-loving, non-physical Source energy, basking in, and knowing of, our magnificence. The only problem with being non-physical was that we couldn’t express our perfection in a tangible way; therefore, our chances of expanding consciousness were limited. As a result, we made the decision to express our non-physical Godliness into a physical time-space environment.

And so we flowed through atoms and molecules to form mountains and oceans, and we diversified through a plethora of plants and animals, skies and landscapes. From that higher perspective, we understood that our diversity would be our basis for expansion. Articulating ourselves in a range of different forms, would trigger a variety of perspectives and experiences that, in their interaction, would create something entirely new. And by doing so, consciousness, God, All-that-is, would become more.

Taking a trip down the human history, we can see how this plan is working out so far. We’ve gone from living in caves, and dressing up in animal skin, to residing in thriving megacities, and walking down runways in couture.  In other words, with our every thought, action, conversation, and experience, we literally created more of what is, and pushed the boundaries of consciousness.

With this in mind, the Gay Soul reveled in the possibilities for expansion that diversity brings, and wanted to take it to the next level, by being different in a fundamental way. Therefore, the gay soul incarnated into the human body, knowing that being different in such a way would trigger intense contrasting experiences, both positive and negative. Despite that, it was willing to take the ride, because it understood that with every contrasting experience comes the asking for an improved situation. The Law of Attraction states that, when you ask it is given. With this in mind, the Gay Soul also understood, that all the asking that came from discrimination, bullying, and victimization, would eventually be answered, and the world would change for the better.

And then it would all be worth it.